People who’ve known from close quarters will vouch for the fact that I’m a strong advocate for woman’s rights. This post may have served as an indicator for the keen eye, even otherwise I’m openly voicing my opinion in this post. In a world filled with chauvinists I don’t mind being called a feminist, and infact I think it’s cool! I also realize it’s high time I stop this self praise and cut to the chase if you may. If you have been watching any desi channels offlate or even the news, you can’t help but notice the Ponds commercials featuring Saif, Neha and Priyanka from blingtown. I actually like watching TV commercials for the creativity factor as opposed to people who switch channels during a break. This ad has every reason to hold on to the remote, for it features a former Miss World, a former Miss India and a blackbuck hunting Nawab of Pataudi. The reason I chose to name their titles is because inspite of having some impressive credentials they chose to endorse such a campaign. I’ve always had my differences with fairness creams for I personally feel that you cannot reverse pigmentation. You can only prevent the skin from getting tanned or clean the pores and make it look vibrant. But your color is what you are born with. Melanin and the variation of it’s concentration is genetic. You can only surgically change it, and we all know what happens then!

Enough of this science class and I’m no dermatologist, so I’ll stop here. I saw the ad and later devled into it and found its making video. What followed was pretty shocking as I heard what the actors felt about the shoot and the product. Here’s the full making and below are a few excerpts 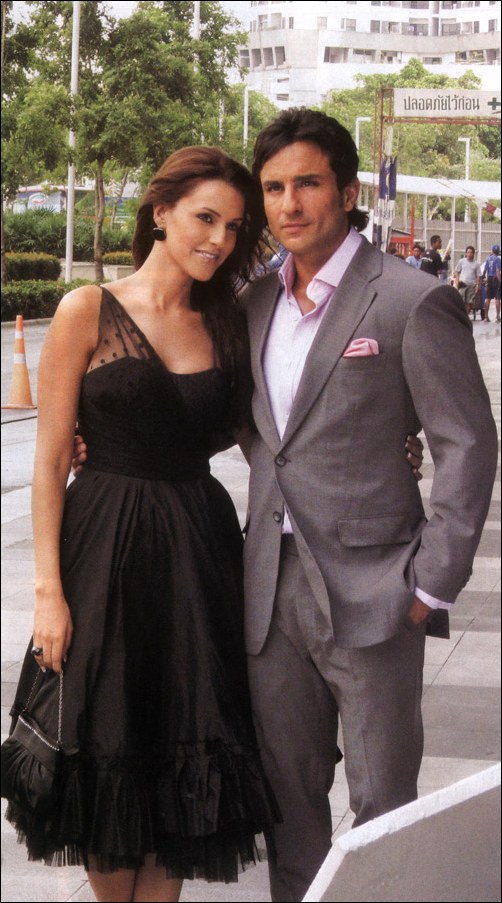 Neha: This is a beautiful film we did for ponds, the brand has the ability to make everyone and everything look beautiful

Priyanka: Being a part of ponds and turning around and saying ‘This does make a difference’ makes me feel great! I know it did to me so i can with all honesty tell you.

Neha: We need things(products) that are promising that look after our needs

Priyanka: Love is what make s the world go around, and ponds is love’s helping hand

Neha: For every need of a woman Ponds is always there.

Saif: Blah blah blah (Do I need to even tell you or do you really care? The man’s verbally challenged, so ‘lite le lo’)

What pains me the most is that two women who were the epitome of beauty and chosen to represent the country at the grandest stage ever, talk like this! However it’s a known fact that there they mouthed rehearsed lines on poverty, world peace and education. For those who are still trying to figure out the reason behind my resentment, let me briefly explain the plot.

Saif dumps Priyanka who is dark and falls for a fairer Neha. If he digs only fair chicks hen why they were together in the first place beats me. The ‘bechaari and dukhiyaari ladki‘ that Priyanka is sees an ad that enlightens us that there are two shades of white. Neha is
only
pale white
and pinkish white
beats it
in a game
of rock-paper-scissorsNeha is only pale white and pinkish white beats it in a game of rock-paper-scissors. So Priyanka sets out in her quest to turn pinkish white ‘sirf saath hafton mein‘. Meanwhile bad girl Neha sends Priyanka message from Saif’s phone who is oblivious to the scheme! This scene should certify that pale white is evil and hence must be beaten at all costs. In perfect filmi tradition Saif has a fight with Neha and comes to buy flowers for her from a shop owned by who else but ‘apni seedhi saadhi dukhiyaari ladki‘ who is in the 5th week of the process. Old flames ignite, but since this is not a contraceptive ad they cut the scene then and there. Finally at the airport Saif sees Priyanka ascending an escalator while Neha is descending at the same time. This is when he notices the ‘saath hafton ka kamaal‘ and symbolically we are told in whose favor the balance has shifted. Being a huge fan of south Indian cinema I was quick to spot where this idea came from. Look at this video if you want to know what I’m talking about(After 1:30 to be precise). So finally pinkish white beats pale white and Saif comes running back to Priyanka, who is ecstatic to have him back and accepts him with open arms.

For those who want to hate themselves, the five-part ad can be found here, here, here, here and here. Some of you may want to sway away from the issue and praise the concept and creativity. So for your viewing pleasure I also present the original version of this ad. So much for creativity and concept!

I can’t comment bout the ladeej, but am I the only person who felt shameful for being a guy after seeing this or are there others?  Isn’t this a form of racism? And which sane girl would take back a guy who dumped her because of his lust for the fair skinned?   A few questions rose in my head and I throw them open to my readers to ponder.

Q: Who is to be blamed?
1) Such products or the makers of such cliched ads?
2) Such spineless men and women without self-respect?
3) The psyche of the society as such and its preference for the skin tone.

The floor is all yours…

PS: I was expecting some of my more vocative and popular female blog friends to take this up, but ended up taking it myself
PPS: I know isn’t your regular post, but it hit me hard. The usual stuff will be back soon.