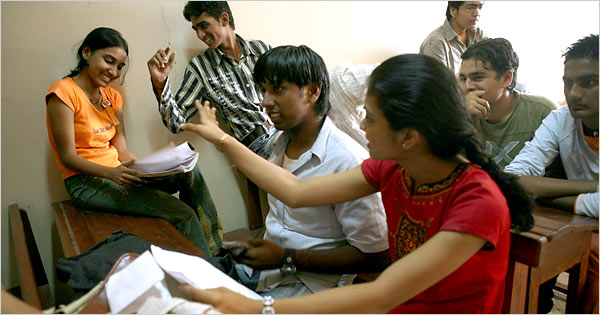 College is the best thing that ever happened to me and I’d go back given a chance. To my knowledge almost everyone would, so big deal. As part of the flashback series we continue from where we let off in the previous post. For those who’ve come in late, a quick recap. Me and a friend ragged a girl while oblivious to the fact that she was a lecturer on her first day. As fate would have it, she was assigned to take labs for us. When she entered the lab and announced that she would be taking charge for the semester, me and my friend hid under the tables. We’ve been hiding under the desk for three days now, so let me tell you what happened in the promised part-2.

Ms.Yellow Chudidaar was at the other side of the lab introducing herself to the students while I was trying to come up with a escape plan. People around us noticed that we were hiding under the table and soon everyone in the the last two rows had noticed. The dreaded
roll
call began
and I hadn’t
yet thought
of an escape planThe dreaded roll call began and I hadn’t yet thought of an escape plan. Unable to bear the multiple kya hua’s from everyone my smart ass friend told them that his SIM card had fallen somewhere. Another moron offered to help and joined us under the tables. So now we had one guy planning an escape, one almost ready to shit in his pants and one who was looking for a non-existent SIM card! The door was far away and the windows were grilled, so the only plan was to stay put for as long as possible and then sneak away when one of our so-called-studious girls ask Ms.Yellow Chudidaar their impression-ke-liye doubts. I was roll no 15 and my buddy was 23, we had mutually agreed to remain silent, while the third guy was still looking for the SIM card! Ms.Yellow Chudidaar rattled of the numbers and soon arrived at 15, at that point I so badly wished there were a hundred numbers between 1 and 15.

She then went on with the remaining numbers when suddenly my buddy’s conscience awoke. At call for 23 I saw him giving me the look. Little did I know that it was an indicator for what was to follow and he stood up and answered for the call of 24. In the process his head hit the desk again and he also gave out a yell. Ms.Yellow Chudidaar who was looking at the register all this while, looked up and was startled to see two guys who had stood up and answered to 24. You may call it an act of stupidity or bravery but he was ready to face this demons. I wanted to bang his head on the bus for his stupidity but was also awe of him for standing up.

We sat down silently and the roll call continued, we didn’t speak to each other for the next 60 minutes. Despite everyone asking/IMing us we tried very hard to shrug them off and genuinely played the SIM card story. The next 60 minutes were the shortest in my life for it only seemed like 10 minutes before the bell rang. Everyone left the lab and we were the only ones left along with Ms.Yellow Chudidaar. As we trudged towards the lecturers desk, I was preparing an i-am-sorry speech in my head. Just I was about to speak, My so-called-clever buddy interjected.

Buddy: Come on maam, we didn’t do anything serious na! (I was totally zonked by his statement)
Ms.Yellow Chudidaar: What do you mean? and how dare you rag a lecturer? (Time for damage control as I prepare fro the worst)
Me: We are extremely sorry maam but you look so young and anyone can mistake you for a student. (The youth card always works with women)
Ms.Yellow Chudidaar: (In no mood for flattery) What are your names, let me report you to the HOD. Don’t you know that ragging is banned?
Buddy: We only asked you your name, details etc and made you to do a salute, can’t you forgive us? Plus my friend here began the ARS!

ARS stood for Anti Ragging Squad and that was the last thing that I needed. What followed was some of the most embarrassing moments and we tried everything but ‘pair pakadna‘. She was a recent graduate and let us off with a smart bargain. I wonder if it was our begging skills or my charm that worked on her, lets stick to the former! To save my skin I had to ensure that my gang never missed a lab and attended all her classes. That included free lunches and other stuff to persuade people to attend lab and not the volley-ball court. Till the last day, if there was no one around Ms.Yellow Chudidaar would always greet me with a ‘Good Morning Senior Saar‘. Every time that happened I felt like digging a hole in the ground and hiding my head.

However this didn’t stop me from keeping a watch on the freshers!