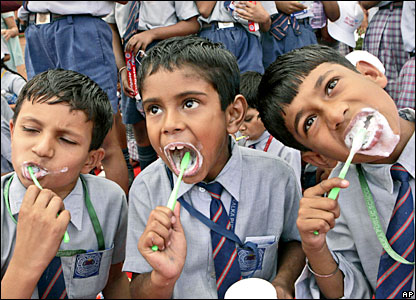 It has been a while since a post appeared in this category, for most memories are either not worth documenting, or the other extreme where they don’t meet PG-13 standards.  The later years of school is probably the most memorable for many, that is if you’ve gone to a good school. That’s the time when you’re in the school prefectorial body, house captain etc, and your attendance at cultural &  literary events goes higher than the class register. Some of us are even sarcastically addressed to as Mr/Ms.OD(On Duty) or even as visiting-professors. With all this attention that you receive, comes a side-effect as well which is unavoidable. Your growing popularity in school attracts love-struck students of the opposite sex who are high on hindi cinema like flies to a sugarcane-juice stall. Well they can’t be blamed completely after-all the 90’s were full of college romances and in the last decade that came a level lower and spread to school stories. TV shows gave a whole new meaning to the scuffed ties, pleated skirts, school buses and taught us what teen romances were as they opened a new genre of mega-serials.

Now I belong to a batch that was heavily schooled on the two biggest
monstrosities
of Indian cinematwo biggest monstrosities of Indian cinema, DDLJ and KKHH. Where every girl secretly wished to be a Simran/Anjali waiting to be swept of their feet by a Raj/Rahul, only to end up with losers who made Johnny Lever look like the VIP-Frenchie man! This flashback story has two characters like every bollywood masala romance ought to and a few unimportant side characters. This story isn’t about me , so please take off your doubting hats and cease to read between the lines. Let me begin with the girl who fits the description of Ms.Popular from the para above, and was on the prefectorial body as well. She was a worthy competitor in all the literary events and we did share a healthy rivalry, enough about me for this isn’t my story! Since we can’t take names here and I am told that a few chums from school silently read this useless blog, so let us call her Priyanka Chopra for convenience. I like to paint the women in my stories as strong achievers and in lieu of the hockey world cup ads, let us use this for now. The so-called hero is a refrigerator-like-looking guy, who was heavily built and his puffed bloodshot eyes might suggest that he burnt the midnight oil though his mark sheets would disagree. Since the first thing that comes to mind is a stomping Sunny Deol, let us call him that for now. Having successfully though distastefully introduced the characters, the story warrants a new paragraph for the plot.

Ms.Chopra was quite a popular person in school and had her share of admirers, her biggest deewana of those by miles was however our man Deol. After week of staring, and peeping from behind the stairwell, our man finally mustered the courage to let out his feelings one day. Now in times like these it is the friends you have, that cause more damage than being of any assistance. Who ever guessed that behind those owl-like-stares, there was a childish innocence that jumped with joy every time he got a discerning glare in return!  Not quite sure who’s idea it was but he accosted her one day in the school ground and blurted ‘Hey, 143 I to you,
think and tell
2 daysHey, 143 I to you, think and tell 2 days‘. I kid you not for these were the very words he used, I’ve never been able to get over it and it haunted many of us for weeks. Now our school had these humongous trees, wide enough for 4-5 kids to hold hands and form a circle. Those trees were one of the reasons I opted to join the school in the first place, and kids often had lunch under one of these many trees. Finding Chopra alone, Sunny boy jumped from behind a tree to make his point, which according to him was the pinnacle of bravery. Our babe Priyanka however wasn’t amused and ran to class in a huff, leaving Sunny boy with his outstretched arms waiting. Her friends, the more wiser ones advised her to ignore the incident and avoid the guy for a while, hoping he’d get the message. When you have a stud like Sunny, you can safely assume that his friends to be in the same league, devoid any cranial connections. They advised him to do something heroic that may impress his lady love, clearly an overdose of 90’s regional cinema but then hum kya karen? One morning as Chopra was making her way to class, she was accosted by Deol near the 2nd floor balcony.  While I don’t quite recall the exact conversation, I do remember it ending with her asking him to get a life.

It was quite early in the morning and only the senior students were in school for special classses, to make up for the days lost due to various jayanthis, vardhantis and bandhs. Not quite sure of what riled him up, but in his bid to impress Chopra, Deol’s heroic thing was to jump from the balconyjump from the balcony. Now I don’t quite know if it was planned or his luck but there was a parapet just a few feet below the balcony where he landed. Given his track record and the collective IQ of his gang, I’d vote for the latter and say he was lucky. The sight of a refrigerator size guy jump out of a balcony was enough to zonk our sleepy heads on a foggy morning. Now however came the camel under the hillock, from the parapet he couldn’t climb back to the balcony for it was a good 6ft, and the ground was easily 10ft below. Adding to his woes was the fact that the jump had ripped his trousers from behind, they either were unable to take the force of landing or probably the angle wasn’t right. The end result however was a hefty deewana stranded on a parapet with his brick-red chaddis greeting the world from his behind. His friends later managed to fish him out, as he darted home for a change of clothes with a  sweater tied to his behind. While occasionally teased bout the incident, his eyes would go brick red along with his cheeks but he generally went unnoticed. Chopra however had to face the trauma of being teased for a long while and linked to a guy who had a penchant for red chaddis and jumped the balcony for her.

PS: Neither of them read this blog, and I have no idea of what they are upto now. Those of you who’ve seen me, know that I look nothing like a refrigerator.