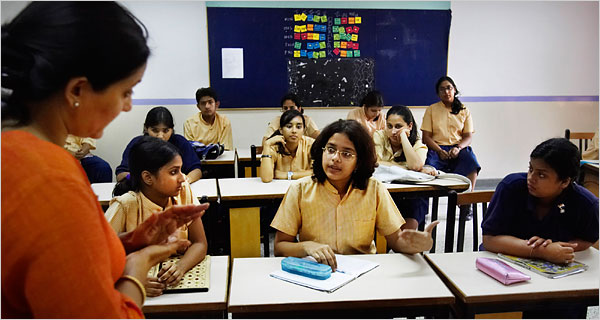 As India yesterday celebrated Teachers Day to commemorate the birth of the second President of free India Radhakrishnan garu, I tried to recollect some of the horrible things I have done. I am not going to mislead anyone by claiming that I have been the teachers pet. I’d rather say that I was a teacher’s nightmare and my mom never attended any parent-teacher-meeting for she knew that she would always be in the firing line. I was always an out-standing student though, if you know what I’m talking about! The same continued in college and I only had virtual presence in class by proxy. My real attendance though was a 100%  in the volleyball court and the canteen.

We were never the ideal students anyone would look up to, that gang was separate. We’d get into fights, break rules, have tiffs with the staff and engage in
anti-social
activities that
can’t be mentioned hereengage in anti-social activities that can’t be mentioned here. According to me if you haven’t boycotted classes, got into a scuffle or been suspended in large numbers then you can consider your 4yrs of Engineering worthless. Ragging was probably the most fulfilling experience and here I mean both ragging and getting ragged. A lot of people may get touchy on hearing the ‘R’ word and launch scathing attacks against me. If anybody wants to argue on the inhuman activities that are passed off as ragging then you are more than welcome to be my guest. It’s only those without a spine that get ragged badly and if you cant stand up to a bunch of guys elder to you, then forget the world! The previous line may not go well with many, but then I’ve seen the worst things happen and experience speaks! If a guy from a posh urban school is today lean mean and tougher than most rowdies, then I’d without an iota of doubt attribute it to those four years. So lets not further incite the ragging debate and get to the crux of this post. I have tons of ragging stories but most of them aren’t suitable for family audiences, this one however takes the cake.

We were in the IIIrd yr and the semester had just begun. All the IInd yr students were hanging around the Ist floor verandahs like vultures waiting for their prey. The first floor was reserved for offices in the left wing and fresher classrooms in the right wing. The freshers would walk with their heads hung low and desperately try to avoid eye contact and be conspicuous. They’d rush into their classrooms and bury their heads into their textbooks, praying for the bell to ring and classes to commence. Seniors(IInd n IIIrd yr) would either call the most conspicuous ones out of the classrooms and take them to the ground or canteen or even get into the classrooms and have some fun. I was just sitting on the railing keeping an eye over the proceedings with a sense of deja vu, been there done that! For the uninformed, after tormenting kids for a yr and doing unspeakable things under the name of ragging I was one of the founders of the anti-ragging-squad. Yea yea, we had a free hand and earned a lot of enemies among the staff and hence this was our way of redemption.

I always encouraged healthy ragging but kept an eye so that no one went overboard. Me and my buddy saw this girl walk by in a yellow chudidaar with a long book in hand. My friend was pretty pissed of by the fact that she ignored us and walked past without even greeting. I must tell you that in our part of the country, all freshers greet seniors with a salute and
a good
morning sir/maamall freshers greet seniors with a salute and a good morning sir/maam. I was busy channeling my energies on a cute girl in CS but my buddy wanted to do something. In a total maddy moment I snapped my fingers twice (it’s pretty loud), she stopped and turned. With my index finger I signaled her to come closer, she frowned and came. I was once again looking at my interesting CS fresher while my friend grilled Ms.Yellow Chudidaar. She wasn’t replying and just stared at him, he lost patience and I had to intervene. With my steely gaze and stern voice I asked her to do the salute and greeting and get one with her day. I could see her quiver and hence didn’t want to stretch things further. She did it but kept turning back and passing cold stares as she walked away. Well we were highly respected among the kids, and most of em’ saw as as messiahs but this one in particular irked my buddy. We went back to scouting for interesting females and telling over enthusiastic kids to back off.

The bell rang and we all trudged back to our classes while the freshers were happy that their prayers were answered. Ms. Yellow Chudidaar had disturbed my friend a lot and he kept talking of her during class. We attended class for we had the guy’s lab in the next hour and lab was something we’d never miss. The bell rang and as we were going to the lab, my buddy was still thinking of ways to get even with Ms.Yellow Chudidaar during the lunch hour.

Suddenly Ms.Yellow chudidaar walks into the lab and announces. Morning students, I am XXXX and I shall be handling this lab from today.

The world stopped rotating for a minute as everything went blank. Me and my buddy hid under the desks and banged our foreheads in the confusion.