If I asked you to connect the above stotram to a king, two movies and a city, I bet that even my very learned quizzing friends would be stumped. This is stuff you don’t learn by watching ‘Paanchvi Fail‘ but instead hanging out with his holiness ‘Baba Bangali‘. These Sanskrit chants were used by the music director Keeravani(M.M.Kreem to people residing above the Vindhyas) as the theme for a so-called-hit film starring ‘young rebel star’ Prabhas. The second movie that it connects to is the latest disaster from ‘Ilaya Dalapathy’ Vijay called ‘Kuruvi’. At first, I had no idea of Vijay’s new film and thought that ‘Kuruvi’ was a B-grade flick cashing on a very lovable character from a brilliant film called ‘Anjathey‘. Confused? well let the master explain.

It turns out that Kuruvi is an under-the-table name for people who travel abroad carrying goodies in their check-in baggage and thus saving both parties (exporter/importer) on custom duty and unwanted taxation. If you ask me they are white-collar smugglers in short, Vijay plays the role of one such guy(duh!) and you need some chyawanprash if you haven’t figured it by now. Let’s not talk about the film for this isn’t a review and I want you to suffer the ordeal yourselves! At the stroke of midnight on new years eve, if someone swings
across
the Petronas
towers wearing a
Zorro cape
like a trapeze artistsomeone swings across the Petronas towers wearing a Zorro cape like a trapeze artist with a beautiful maiden(who looks absolutely stunning) in hand, then how do you feel? If you have this strong urge to whistle and dance in the aisles applauding the extraordinary feat of your matinee idol, then this movie is exactly made for you. Here comes the connection to the previous paragraph, the second half of Kuruvi is the first half of the film mentioned above. They are not similar or inspired from types, but straight frame-to-frame dump types. Lets not compare the towering screen presence of Prabhas to the diminutive Vijay, as I don’t want to be spammed by fans of either star.

Now for the third connection, the Telugu movie starring Prabhas was titled ‘Chatrapathi‘. Chatrapathi literally translates into Chatra(roof/umbrella) and Pati(Lord/husband). For this reason there is a guy standing behind Prabhas holding an umbrella(It is a brilliant scene mind you!) as he champions the cause of the exploited refugees. The great Maratha ruler ‘Shivaji‘ had assumed the title of Chatrapathi for he provided shelter to his needy subjects and protected them from repeated attacks by Muslim rulers. More on Shivaji’s valor and prowess here and here. Growing up in Bombay(that is how it is for me!) as a kid, I’ve heard numerous stories of how his wit helped him upstage multiple attempts on his life by the Muslim rulers and also about his innovative and successful capture of various forts. If you don’t have an iota of what I am talking about then try this and this. Also I think there is something that connects kings, temples and umbrellas for there is an umbrella raising event during the Thrissur Pooram festival. 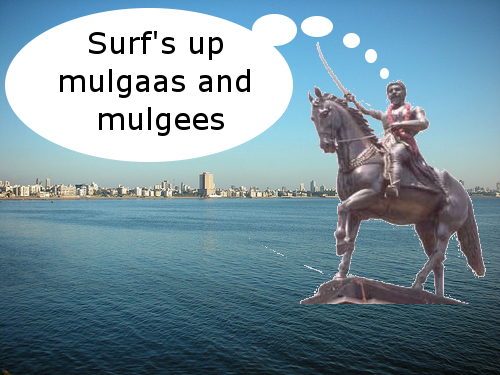 Lastly for the fourth connection, the Maharashtra government has supposedly approved a proposal to erect a 300ft Shivaji statue off the Mumbai coast on a man-made island. With estimates going over $4.5million Mumbai’s answer to the Statue of Liberty doesn’t seem like the smartest move made by the govt. The so called voice-of-marathwada has avoided commenting on the issue and has chosen to stay mum. I would rather see the 100yr old drains of Mumbai relaid as opposed to watching Shivaji’s heroics in an open-air-theater with an attached park, museum and cafeteria. I won’t be surprised if this proposal inspires the Tamil Nadu govt. What better than a tussle between the AIADMK and the DMK on whether to put up a MGR or Annadurai statue. Imagine a new statue every 5 years depending on who comes to power! I’d be surprised if the current party presidents erect their statues instead. Personally I feel that Amma comes the closest to Ms.Liberty, only that the statue would have to be 300ft wide! However in an attempt to be in-sync with Shivaji, the Tamil Nadu govt may arrive on a consensus candidate and that being the brave warrior Veerapandiya Kattabomman. Only if they didn’t give him the face of the great actor who portrayed the title role in the film, for that would open a Pandora’s box!