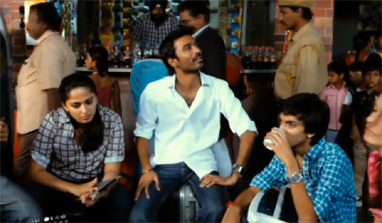 Friends, Maldivians and Karantaka MLAs, this is Munna Mobile bring you yet another bulletin of news you cannot use. Before we get to the biggest story of the day, I’d like to remind you of a great movie called BASEketball that released in the 90s and was a regular on Star Movies ever since. For those of you who haven’t watched it, the movie starred the creators of South Park who invent a game that goes on to become really big. The game involves playing basketball with baseball rules, the two most popular american sports. They also add a few crazy rules that made it legal to distract opposing players. One such distraction was called the psyche out, and here’s whatwiki says. A “psyche out” can be anything said or done that makes the offense lose their concentration and miss their shot. For those looking for a #FrameOfReference, a similar approach was reportedly being used by the Sri Lankan cricket team in this game. I was at the ground and I bring you the transcribed stump mic recordings of various instances during the course of play where the SL team used lyrics from a yet-to-go-viral video by so-called actor/singer Dhanush to torment the Indian batsmen.
*_____*_____*_____*_____*_____*_____*_____*_____*_____*_____*_____*_____*

“Sanga, they’ve made me the captain again. Why do we have to do all the work like giving orations and taking the team to WC finals. They will neither find a young guy to groom as captain and if we object they’ll send ageing ministers to make comebacks as openers!”
“Don’t worry Mahela I’ve got this one. That kolaveri guy has released another god awful song, hearing it will make WG.Grace shave his beard while in the grave. It is so bad that humming it gave me a brainfreeze and I let that milk-boy stump me out while I was batting.”
“Oya Monada karanne ?, I knew there had to be something fishy the way that leather-allergic excuse for a wicket keeper got you. Ok then you keep wickets while they bat and lets see if they can take it”

“Viru just took us out for two boundaries, you wanna give your theory a go?”
“Brother viru, I’ve got something for you. one plus one two-u two-u,if not sachin who-u? who-u?”
“Oye chup, Baap baap hota hain, aur beta beta hota hain. Your father is batting at the other end go tell him.”
“Dude Mahela, this guy has lost it. he’s spewing lines that he claims to have told to that Rawalpindi-maniac in a WC game. Don’t worry, we don’t need to do anything this guy will self-destruct any time soon.”
“He’s goooooone, niyamai sanga niyamai”

“Sanga, you said this is a Sachin song. How come it isn’t affecting him? Are you sure the lyrics are right?”
“Mama Mona Karandada?, He’s the greatest batsman for a reason. Don’t worry he’s nearing his 50. He’ll be vulnerable now and when he’s closing on a 100″
“Ah so It’s like that scene in Sivaji where Rajini finally relents to bribe the babus for his college & even gives up his car”
“You might be my skipper but you’ve gotta stop hanging out with murali, he’s got you watching too many Tamil movies. OK this fellow is on 48, here goes..”
“hey Sachin, every bowler-u fear-u fear-u, cricket balls-u tear-u tear-u, bharat ratna near-u near-u”
“He’s goooooone, niyamai sanga niyamai”

“Enough Sanga! you’ve been trying that stupid jingle for long now, the kid is on 71 and might take them home. Looks like this guy will fall to cramps before he falls for your tactics”
“He’s a bloody Delhi boy, they can only dump Madrasans and then walk into the sunset with spiked hair and black aviators. I’ll give it one last try”.
“Hey Virat, hey you are our pride-u ..hey roller coaster ride-u ..every player guide-u we are your side-u”
“Abbey $%^$%^ ki &%&^%&, you’ve been bugging me with that ever since I began batting. Yeh le $%$%^$^ %&^%$^& that’s a six!”
“You nincompoop it is a song for sachin, the guy for whom you made a now famous quote on TV about carrying hopes of a nation or something. Listen again and get the lyrics into that thick head of yours. 28 states glue-u glue-u, nothing else to prove-u prove-u”
” Abbey ^&^*&^ *&^&^*& pehle kyun nahin bola. eeewwww I have to take a dino dump”
“He’s goooooone, niyamai sanga niyamai”
“No Worries Mahela, looks like the poor kid shit his pants, they’re going to have to carry him off the field now”

“Damn it, I thought we were into the tail, but this guy is offering a straight bat to everything”
“Yea he was among the leading run scorers in the tests though his bowling was tripe”
“Malinga’s looking clueless, you wanna try that jingle shit again?”
“They’re both CSK boys Mahela, but I’ll give it a try.”
“Dude Ashwin, One day test-u T20, entertainment guarantee, 89 your entry, bringing honor to our country”
“Machi ghilli da, ippudu choodu, boundary”
“OK how about this. Hey you are our pride-u, hey roller coaster ride-ue, very player guide-u, we are your side-u”
“This and all sappa matter machan, even more severe gaana paatu I’ve heard. Abhi dekho, choopistaanu. Another boundary”
“Last throw of the die. Darling of the mass-u, demi god face-u, oh little master blaster, you are our boost-u”
“Allo for Tirupathi you are giving Laddu-a? Right indicator we will put, show left signal, but go straight and confuse traffic police. teesko one more boundary!”
“It’s ok sanga, so close. yet again…..”

PS: I kid you not, the song is so horrible that even Lalit Modi would psyche out and lose his lisp! Take a look