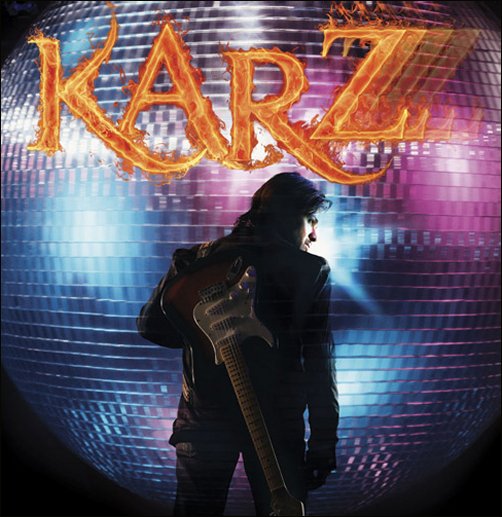 After having endured the music of Karzzz, I garnered courage to boldly do what no man has ever attempted before. Oh Ganesha forgive me once again, for I watched Karzzz all alone in a theater! If not for me they would have canceled the screening, but then I felt like one of those Zamindars in villages who have exclusive screenings and book the whole show! With the whole screening left to me, I could even have a couple of reels replayed, but then not even I would dare do that! Satish Kaushik is a well known funny man-turned-director famous for remakes of southie films. It came no surprise to me when I heard that he was re-filming Karzzz(Number of ‘Z’ is debated), but was all juiced up to hear that Urmila was on board. It’s no hidden secret that ever since Tanha Tanha in Rangeela she has always been a favorite. One thing I observed though, is that Himesh has made note of his short comings. His constipated expressions were the talking point of his debut in Aap ka Suroor the so-called real luv story! He has lost excess flab and pulled out a master stroke from the cap before throwing it away. Since he could not change his expressions, he got people with even worse expressions to act around him! Munna: Err Okay, I gueess you’re on the wrong show. Let’s start with you, tell our readers why they should watch Karzz? Is it for your man-cleavage? the pomeranian-type-hair, the see-thru shirts or is there something else?

Rishi: Arre Dhakkan, why did you even make the film then? I get nightmares of me singing hurry yoooom and wake to see my bed all wet!

Munna: Err, Sir that can be medical reasons as well. But lets ask the man who made the original, on how he feels, SubhashJi you comments…

Subhash: Yuvraaj is a great film, Salman is a great actor even while he isn’t drunk and punching his female partner in the face!

Munna: I can see you don’t wish to answer that so lets ask Urmila, How was it playing Kamini? Munna: Oh well we can clearly see how many offers you’ve been getting and how difficult it is going to be for you to turn them down in favor of your next with the same combo. Dino is here as well, So let’s ask him bout his experiences during the filming of the movie.

Dino: Oh Munna, I so badly wanted to play Monty but I am happy playing Ravi Verma. I would love to be part of a sequel if there is one.

Rishi: Stop sucking upto them you nincompoop, there is no sequel because we haven’t made one. We all know what Satish Kaushik is capable of! So cut the crap will you!

Dino: I am an actor, I play my character. I love stories that have reincarnation or ghosts as the premise. Plus after I wore my earphones I didn’t hear squat what the director was narrating.

Munna: I can see that you were the luckiest to get away without having to hear the dreaded Himsa Raagam. So SatishJi, I hear the music is a rave, tell us something about that.

Satish: Chomp awwwhhh ghhrreeat mmmooosshiik, chomp chomp. I’m sorry for that, Ever since the release our soundtrack has been playing in every dhaba! Me and my crew have been promised a years worth of Tandoori Chicken! Chomp vvaaaary taaashty… Munna: Some very demographically specific marketing I see. So SubhashJi, Does it make you feel a wee bit better to know that the movie is targeted at a different audience perhaps the single screens and not the multiplexes?

Subhash: Yuvraaj will be the greatest blockbuster of this year, Katrina Kaif will blow you all away!

Munna: Ok, wrong question, wrong person. Simiji what do you have to say about the new avtaar of Kamini?

Urmila: Oh stop it Simi, You’re jealous for I look way hotter than you! People could not take their eye of my figure hugging gowns!

Himesh: It’s all ma ka aashirwad and blessings of the public! After a very long time we have re-introduced the mother sentiment in Hindi cinema!.

Rishi: You just made the same film damn it! And stop telling people that it is a tribute to me. Young kids who’ve never watched the original are gonna think that mine was worse! Simi: Who did the casting I say? Even I can pull of a good Tina at this ripe age of 35!

Dino: Sorry to interrupt but I liked the hazel eyed PYT a lot! It was a total Mashaallah Subhanallah moment!

Rishi: Oh shut up you thargi! You are worse than my dog that humps the sofa. After all you were reborn as Himesh so sussshhhhh zip it.. Cast me again and I can dance better than this hatela, plus my hair is not synthetic!

Munna: Well that was my next question, why the robotic arm just to tap musical notes? He could have well fired lasers from it! Or even electric shocks!

Himesh: Well you see we didn’t want to drift from the original, we wanted to preserve the spirit of Karz. It’s a tribute remember!

Rishi: Saala jhoota! Admit it that your pea brain couldn’t even conjure a better use for a robotic arm. Stop eating khakra and watch a few hollywood flicks first!

Munna: HimeshJi, I must say you look really trim and I almost mistook your opening song as an Emran Hashmi guest appearance! What do you say SubhashJi?

Subhash: Yuvraaj is a fantastic movie! Anil Kapoor will once again buy a Filmfare for it this time! Munna: HimeshJi, In the last scene where in you rip your sleeve, I almost closed my eyes imagining Monty turn into a Full Monty!

Himesh: We are only trying to recreate the magic of Karz witha slight twist in the tale. We have tried to retain the spirit of Karz and I need all your blessings.

Simi: All you are going to get is my chappal! Couldn’t you have atleast done what RGV did with his fire, oh sorry aag! Heck that was less insulting than using the same name and the characters!

Munna: Some of the dialogs were priceless for example ‘Kenya mein Kanya hain’ or ‘Shaadi bhi ek type ki live-in relationship hain’. Do you guys smoke pot before coming up with such jewels?

Himesh: SubhashJi, Yuvraaj will become a super duper hit. It will be number one, two three on world charts!

Subhash: Oh yea Rahman is a great composer, Yuvraaj will give me that elusive hit after Taal.

There was no point continuing the discussion. However the reincarnation genre is something patented by Bollywood and Himesh isn’t any worse than Fardeen Khan, Emran Hashmi or the Deol brothers. His nasal twang no longer bothers me for I have heard guys who are worse, but I don’t get the reason why people love to hate him! The man has made it big in Bollywood without a godfather, without a launchpad and without any acting genes. However why one would reinvent the wheel all over again baffles me, and that too with something that is substandard and peppered with jarring songs every ten minutes! The best song in the album was edited out and played with the credits! I was glad Munna Mobile had given me a DivX print of the original, had to watch it again to regain some sanity!

PS: The title of this post is taken from an Eagles album.

PPS: A majority of the references will make sense only if you have been following the news lately, especially movie gossip!