The past fortnight has been a lot hectic with a lot of action going on personally and professionally. Reminds me of the old Asian Paints ad ‘Naya Ghar, Nayi Biwi, badiya hain‘. Thing is that we are still waiting for the biwi part and are in no hurry whatsoever. People have their own ways to celebrate certain occasions, some throw a party, some hog till the end of time, some visit a place of worship and some just plain do nothing. In our case we load up on all the movies we missed and soak up for the weekends spent deciphering queries and deploying modules. So let’s see we have New York, Transformers, Troy, Matrix, Star Wars(IV,V & VI) , Dr.No, Thunderball, World Is Not Enough, Tomorrow Never Dies and Casino Royale while it’s still Sunday here and the weekend isn’t done yet! We might have missed a few but then what stood out was the so-called rip roaring action-comedy that was gonna bail out the Bollywood summer. For those who want to know how this ‘Pammal K Sambandam‘ remake fared, continue reading Kambakkht Ishq….

For those who loved ‘Awaara Pagal Deewana‘ this is just a few notches lower and hence you may be able to tolerate it. For the rest, read this and save yourself money and time. We are pleased that the movie is going to tank badly for we were betting on Khiladi Kumar pulling out
three-of-a-kind
in flops
this yearpulling out three-of-a-kind in flops this year after pulling a flush of hits last year. The Tamil version though a moderate hit is still a must-watch each time it is aired on TV for the raw accent and brilliant lines apart from the comic timing of Kamal Hassan. Here we have some comic timing but it’s killed by a horrible punjabi-meets-LA accent and some pathetic writing. It’s not like we don’t appreciate toilet humor but breaking wind in someone’s face is way below even our levels of cheap humor. There are some laughable moments and you might survive through the end despite squirming in your seat. However when something is billed as the biggest family entertainer of the summer and expected to bailout the entire industry recovering from lost business due to the strike, one is disappointed. There’s nothing much to comment 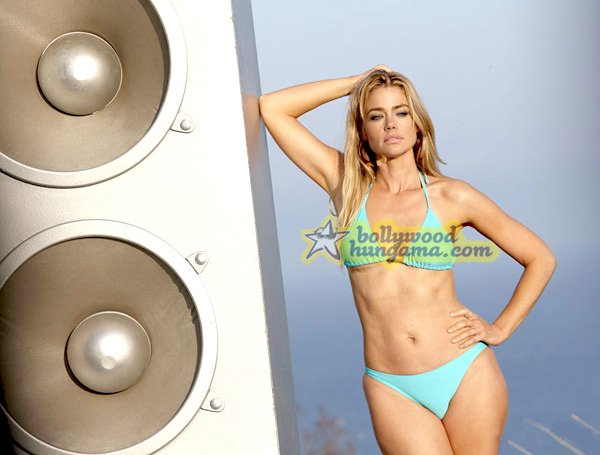 on the story for there ought to be one in the first place and hence we have a two stunt-men friends one of whom gets married to a lingerie model whose best friend is a supermodel/surgeon.  I actually fail to recollect when I’ve heard the B-word used on a woman repeatedly even in the WWE, but here it’s in double digits. One tends to imagine what substance could the writers have been smoking when they decided that the female lead be a wannabe-surgeon who pays for her education by walking the ramp as a supermodel. It may be hard to believe but what’s even harder is the hemlines that barely cover their petite bottoms. With surgeons wearing stuff like that under scrubs, I’d walk into the emergency room any day! The story could have been set anywhere and it wouldn’t have made any difference, unlike the makers claim that the Hollywod cameos are central to the story and the script demanded them. Just like the ICL that provided discards and retirees a new avenue to make some bucks, Kambakkht Ishq opens the doors of Bollywood to failed actors and once-upon-a-tie hotshots a chance to face the arclights again!

Akshay is a misogynist stuntman who lives in a palatial villa over looking a beach enjoying benefits such as flying first-class, an assistant making protein shakes and a masseuse for his feet. Well maybe stuntmen in Hollywood do make that kind of dough but where in the world do surgeons strut as supermodels? The reason I earlier mentioned ‘Awaara pagal deewana’ was because Amrita and Aftab pick up their charade of wwwabbit and chweety pie. It sure is nauseating but then she justifies her character as a lingerie model by foaming herself whilst washing the car and cooling her legs in the pool. Aftab like usual is quite unsure of what he is doing but since he is neither in a swimsuit nor are we interested in men, it doesn’t matter to us. You have Javed Jaffery as Mr.Case-wani who is out to become ‘Amrika ka sabse bada suer‘, oh come on you’re supposed to laugh for that! Then there is Bebo Kapoor in an even more irritating avtaar that beats K3G as a model with a hideous watch that chimes mantras every hour. Having seen the other Nadiadwala flicks we didn’t expect much except for heavy budgets and foreign locales like Venice etc. Witnessing Denise Richards emerge out of a pool in a 2-piece looking like a crack-whore was quite depressing and for once we had to look elsewhere. However when she evinced interest in making ‘golden babies’ with Akshay Kumar, it brought back memories of Goldmember and mental images of a golden you-know-what! Only if we had someone to un-button the image out of our head, but it wasn’t meant to be.

We actually enjoyed part of it and could help but laugh at a few gags. They were however very minuscule wen compared when compared the the glaring holes in logic and reason. How else do you explain an award acceptance speech in Punjabi on the lines of ‘Action hero guru daivo namahahAction hero guru daivo namahah‘. It basically translates to how a kid in Amritsar or thereabouts idolized Stallone like ‘Ekalavya and Drona from the Mahabharata‘ and ended up as his stunt double. I think we are lucky that he didn’t say the ‘Abhivadaye‘ and prostrate before Stallone, he touches his feet however. So then we have cliches like a drunk girl waking up naked in the morning only to find out that nothing happened and even in the ‘videsh‘ people have hearts from the ‘desh‘. The ghost of DDLJ continues to haunt us to this very day with loud aunts on a single mission to get their nieces married. You realize that you’ve had enough when Sylvester Stallone pulls out a parking meter to whip a bunch of baddies, brings back memories of Sunny Deol and the water pump scene in Gaddar doesn’t it? Well actually when you’ve reached this point, you give up trying so it doesn’t really matter.