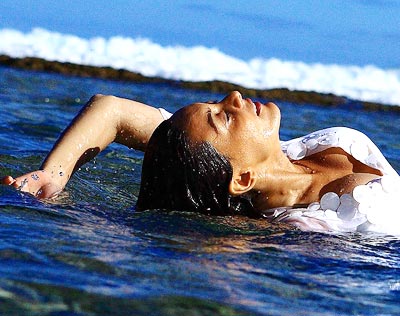 It’s been a while since I’ve seen some bad cinema and I was missing the agony factor. It’s no secret that bad movies give a kick, much more than what a shot of vodka, vibhuti and vadu maanga does! The wait finally ended this week when I saw not one but 4 box office duds! I wasn’t quite much expecting a show but when it was the guy who gave VRF their biggest hits, I was expecting something decent. Now I’ve got to be frank and state that Dhoom was better and I slept through the over-hyped sequel. After Imran Khan‘s pleasant debut I was excited to see how he’d pull of a mean guy role that contrasts his chocolate-boy image. Throw in a haggard looking Sanjay Dutt, ample cleavage shots of Minissha Lamba and Vidya Malvade and you have a perfect recipe for disaster. The camera seemed to have a mind of its own as it ignored the head and chose to focus only on the midriff and bosom in a few scenes. My guess is that it was loaned to them by aaaoooo Shakti Kapoor. All said and done, but I was totally taken aback by what followed and it took me a while to regain my senses. Without wasting further time and web page real estate, Bhaiyon aur unke Beheno we present..

‘The Dappan Koothu guide for kidnappers, victims and their parents’

When you storm out of the house after an argument with your mom, be sure to wear a bikini underneath.

Who knows, you see the inviting and serene sea you may feel like taking a swim. You have to cater to the people who missed the first five minutes as they were haggling witht he popkorn guy or trying to find a parking spot. Since nobody expected you to open the movie with a song and cavort in your inners, you ought to give the a second chance! Also this gives us an opportunity to see the waters kiss your feet as the camera drifts over your washboard abs.

When you wake up fully clothed and the last thing you remember is prancing in a bikini, don’t forget to ask the question every pure indian girls asks!

Seriously girl, aren’t you botherd as to who dressed you up and how you landed in an abandoned house? I mean every girl who has seen DDLJ will obviously ask questions like ‘Tum Kaun Ho’, ‘Mere Kapde kisne badle’ and not go seaching for your girlfriends. If your girlfriends wanted to play a prank they would hire a more mean looking guy, instead of leaving you alone with a chocolate mousse! So better watch some bollywood before you ask absurd questions, it really helps!

It’s not the best time to fight with your ex-husband once you realize that your daughter has been kidnapped.

You may hate the man that left you and chose his work over the family. But asking him to leave the house when he is the only guy the kidnapper will talk too doesn’t seem too intelligent! Wearing tight fitting shirts with two buttons open sure helps, for the kidnapper may choose to return your daughter and grab you instead! I sure for one felt that the mother-daughter roles could be reversed because the business suits clearly looked more luscious than the bikinis.

Live close to a building under construction, it helps if you have to chase the kidnapper

You may also want to hit the gym regularly for jumping and chasing may takes it toll with age. Though it may seem inspired for me it was the only saving grace apart from the skin show. As a parent do pray that the kidnapper cant jump floors, for that would be an unfair advantage! Don’t try to irritate your kidnapper by not answering his calls, He’s got your daughter dammit and not selling you credit cards!

Trying to seduce your kidnapper with a dip in the sea and rolling in the sand isn’t the most clever thing to do.

Who bathes in the sea when there is not enough water at home? OK maybe mermaids do, but then don’t we all need to shower off the salt and sand? If i was locked in a house with no water to bathe, I’d rather stink than smell like the beach! I’d think of ways to escape rather than seduce my kidnapper and take it as an excuse to break into a song. Also you might always keep a set of extra clothes in your car, may come handy when kidnapped!

When you kidnap someone try to focus on your work rather than staring at their chest or watching them change clothes in the silhouette.

You’ve already seen her in a bikini when you kidnapped her, and the last time you got distracted by her curves she stabbed you. You may be hot blooded and it may be your first real crime, but that isn’t an excuse to be staring! Don’t let your victim do the dishes for she may try to stab you with a knife, and you always won’t be lucky. It’s not always a good idea to pin your victim on her back, can’t rely on the darn hormones you see!

When your kidnapper is shot in the arm, try escaping instead of tending to him.

You may consult Baba Bangali it your don’t believe me but commonsense will say the same. Your kidnapper is wounded and unconscious, just cause you went to a convent school doesn’t mean you nurse his wounds. Lets say you are a good samaritan and do some basic first aid, but then why do you have to sit and wait till he wakes up? You’ve got him in shackles then why do you need him to dial your dad? Am I missing something here? You are soon-to-be-18 why cant you cal your dad yourself instead of asking the kidnapper to do it with a gun to his head!

So ladies and gentlemen, boys and girls, children of all ages, I hope this guide comes handy the next time somebody is kidnapped! Oh wait you could also watch this movie by the same name…