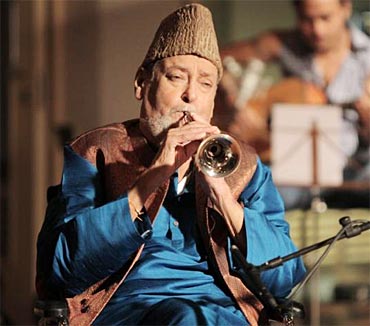 This has not been a good year for Hindi cinema, with severely hyped duds or blockbusters that made us groan & shriek in disbelief for the moolah they raked in. Rockstar is backed by an awesome soundtrack by the maestro A.R.Rahman & sadly many can’t or refuse to see beyond that. There have been many movies that have featured brilliant compositions but rarely has that managed to hide the godawful monstrosity behind them. Rockstar is no exception and it seems like Rabir Kapoor was the unfortunate soul to be denied the stuff the whole unit was smoking. I kid you not when I tell you that this was the better entertainment option of the week & precisely what I needed to cleanse the system & get my sanity back. The only redeeming portion in this mindnumbing movie barring the songs, was a 2-minute re-enactment of ‘Yeh Chand So Roshan Chehra’, the best tribute to Shammi Kapoor sahab.

(haiiyo another pyaar toh unka jhoota hain case) “The story is based in Delhi right? Maybe I can write a song for Harzat Nizamuddin, will you like that?”

“Sirjee, no problem sirjee. I will make that an integral part of the movie, people will sing every year in SareGaMaPa’s sufi episode!”

(wastefellow, It will be like fiza where nobody remembers anything but Haji Ali) “Sure sure that will be great, how many songs do you need?”

“Story toh hain nahin ji, I only have an ageing out-of-work ABCD model & an angry Ranbir who is tired of his long hair. So 12-14 songs should do it, I promise you I won’t cut them out like that Delhi-6 fellow.”

(aama da, unnaku enna. story a script a) “Don’t worry Imtiaz bhai, I’ll take care of that. You’ll hear from me in a month.”

“Dei go find if that Mohit Chauhan fellow is vetti. Tell him I have like 9-10 songs for him in an album. Ask if he will give double-digit discount”

“Sir, but why him? He cannot even play thilana on his harmonica. In low voice he can do humming that’s all. Plus we already gave him life with that Khoon Chala song no?”

“Theriyum da, He is Pritam’s favorite. If we hire him this Imtiaz fellow won’t even realize how inexpensive it was for us to do the album, Full profit only”

“Ranbir, I need you to look angry. Grow your hair, scream, scowl and kick your legs as the cops drag you”

“Cut cut no no cut it yaar. I need more anger & more kicking, arrey someone show him the climax scene of that Chandramukhi movie yaar”

“But Imtiaz sir, How do I channel my anger?”

“OK I know it, Aditi Rao will now be the journalist. Here, this skinny molly will now be your love interest”

“Nah kiddo, You get to befriend her, get drunk, watch a dirty movie, drive away to kashmir and then help setup lights and chairs at her wedding”

“Where is the break up? At what point do I drown in sorrow and become a great musician?”

“Patience Kiddo, you’ll get kicked out of the house, take refuge in a dargah and then perform at maata ka jaagaran”

“Still not feeling heartbroken. Also stop calling me kiddo, We aren’t in a Gautam Menon movie”

“Ok look at the girl you are going to fall in love with, now?”

“Our next location is Prague, that way we can do justice to ARR’s brilliant soundtrack. Also pakkya remind me to organize concerts all over the country when we get back after the audio release”

” Brilliant so now we get to do shots, pick up whores, visit strip clubs. Ah deja vu, just a lil more posh!”

“Yes you meet her as she is about to see a psychiatrist, sweep her off her feet and be the other-man in her marriage ”

“I get that, but why is she seeing a psychiatrist & will the junta not ask how a small time artist records songs in Prague? ”

“She’s having an affair, you get to sleep with her”

“Now you are a star, angry all the time, spit on groupies and shove journos, also you again get to kick your feet and get dragged by cops”

“OK why are lawyers out to sue my ass, why do I keep getting arrested and wasn’t I deported form Prague?”

“Wadda faak, I don’t have any rights of my own, also why are people waving that free tibet flag? Who the hell releases an album called ‘negative’ ?”

“Don’t worry kiddo, you can be posh & play guitar while Shammi Kapoor sahab plays the shenai”

“Wait, why will someone like him want to record with me? The audience is gonna ask you know”

“This girl is back in your life & has terminal bone marrow”

“Your girl is bedridden, but your very presence makes her sit up, She musters strength to walk down the stairs and into your arms”

“Is this because Rahman composed a ‘Shirdiwale sai baba’ song for this scene? Also how does hanging out with me increase her blood count? ”

” Ok fine I’ll let you scowl and scream at journos again, and then we can shoot my favorite scene ”

“Don’t tel me my music cures her, even KJo can’t sell that shit with SRK ”

“She goes into coma, you are dragged by cops screaming & kicking. Then during your final performance, you see her walk towards you from the crowd but its not her. She has moved to a happy place ”

” Wait how does any of that make sense? Also why this Braveheart type aatma sighting scene? ”

” You got her pregnant & she croaked”

PS: Give this to Kalpana Lajmi and change liek 20mins of the movie. You will have the story of a free spirited girl, who gets pigeon holed in her marriage, leads an adulterous life with her college friend, contracts a terminal disease and then he re-enters her life to rekindle the feelings. The circle of womanhood is complete with her pregnancy but her body is unable to take it as he slips into coma. Now someone go make that movie!